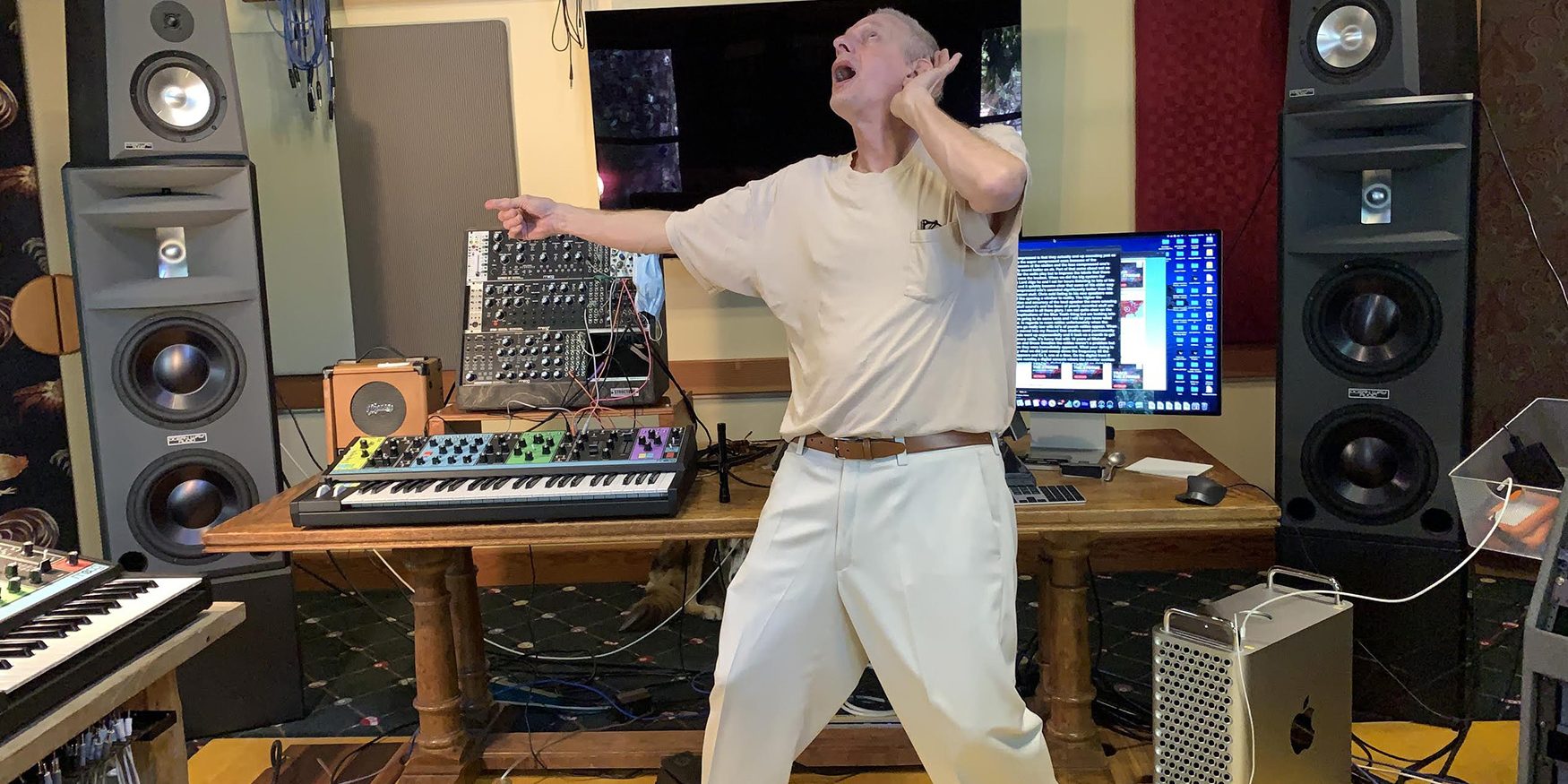 Jed the Fish is seen in his studio with his Ocean Way Audio HR3.5 monitors.

Los Angeles, CA, October 2020 – Edwin Fish “Jed” Gould III, known to radio listeners as “Jed the Fish,” has installed a pair of Ocean Way Audio’s HR3.5 reference monitors in his LA studio. “They are simply the best I’ve ever heard,” says Jed the Fish. “Amazing is an understatement.”

Producer/engineer and disc jockey Jed the Fish became a celebrity as he hosted afternoon drive time on KROQ-FM in Los Angeles. Known for his maniacal laugh and biting humor, he interviewed seminal alternative acts such as Brian Eno, David Bowie, Sting, and Elvis Costello, and is sometimes credited as the first DJ on KROQ to play The Offspring’s “Come Out and Play” in 1994 and Katy Perry’s “I Kissed a Girl” in 2008.

Learn more about Jed the Fish and his current large-scale immersive mixed-media project, “The Shimmering” here.

“OWA HR3.5s are the speakers I have always wanted to own,” Jed the Fish continues. “Every NAMM, I groupie out with Allen Sides. Just stand there and listen to Steely Dan. My go-to for a great, reasonably unspanked recording is the Frankie Goes to Hollywood album ‘Welcome to the Pleasure Dome,’ produced by Trevor Horn. The sound is simply large, not just loud, and the stereo image is generous. While at KROQ, I used to have radio mixes sent my way frequently, and listening to those through the 3.5s truly reveals their ultra-clipped shortcomings. It’s gross.”

An early supporter of New Wave and alternative bands, Jed the Fish is reputed to be the first US DJ to play Depeche Mode, Duran Duran, The Pretenders and thus helping KROQ establish itself as the preeminent alternative radio station of the 1980s and 1990s.

“I asked Allen if I could play my synths through them,” Jed the Fish recalls. “He assured me there are precautions taken at the amp which would allow it. So my Moog semi-modulars sound wondrous. I’m not a fool; I run a peak limiter on my inputs. When you take distortion out of the equation, you can listen loud without hurting yourself. Be reasonable, listen at a variety of volumes, but fatigue goes waaay down with the 3.5s.”

Jed the Fish’s pair of HR3.5 speakers with was personally tuned by Ocean Way Audio founder and designer Allen Sides. State-of-the-art A-4100 amplifiers power the monitors with both analog and digital inputs, 96 kHz and 24-bit sampling, tri-amped delivering 3,400 watts per channel of clean power. At the heart of the acoustic design is OWA’s geometrically complex, composite dual/hybrid waveguide system.

“Actually, these speakers sound better than most studio monitors for a variety of reasons,” Jed the Fish explains. “#1, lots of studio monitors are driven by abused amps; #2, it’s Allen’s up-to-the-minute designs; and #3, lots of studio monitors only sound good from directly behind the desk — these have 100-degree horizontal dispersion, which means there’s no bad spot to listen from. You can actually go to the next room and still listen to a miracle.”

Jed the Fish began his radio broadcasting career while a student at Casa Grande High School in Arizona. The Newport Beach, CA native spent his high school years with his family in Casa Grande, earning his First Class Radiotelephone Operator License in 1971 at age 16. He programmed and hosted a radio show targeted at the “youth market” on KPIN-AM in the afternoons, where his interest in alternative radio formats and recording techniques took shape.

“The sad part is most people listen through a one-inch speaker or on cheap earbuds,” Jed the Fish continues. “Don’t get me wrong, earbuds are a worthwhile convenience. But the best reason to have the Ocean Way Audio HR3.5s is just for you. Your own enjoyment. It’s one of the nicest things a musician could do for themselves.”

While at KROQ, Jed the Fish also hosted the nationally syndicated show “Out of Order,” a countdown of the most popular alternative rock songs in the country, but, as the name implies, the songs were not played in numeric order.

“The new speakers allow for considerably more distinction in separate sounds,” Jed the Fish sums it up. “The drums aren’t fighting for spectrum space with the guitars. More than anything, the 3.5s finally live up to the old stereo hi-fi trope of ‘hearing each instrument in space,’ even though a modern stereo pair rarely lives up to that hype.”

Jed the Fish’s studio monitoring systems include Ocean Way Audio Ultravoice® amplifiers and voicing modules. Sommer Cable is used both internally for the cabinets and also from the amps to the cabinets, respectively Elephant Robust SPM440 cable and SC-Twincord cable.

ABOUT OCEAN WAY AUDIO
Multi-Grammy award-winning engineer/producer and studio owner Allen Sides is the designer of Ocean Way Audio monitor systems. Sides has almost 40 years of experience designing systems for his many studios as well for a wide variety of commercial installations, including George Lucas’s Skywalker Ranch scoring stage, as well as private installations for musical artists such as Gwen Stefani, Dave Grohl, Meghan Trainor, Steve Aoki, Lady Gaga and Beck. Today, Ocean Way Audio products are in use in many of the world’s most respected recording studios, sound stages, and personal audiophile listening environments.