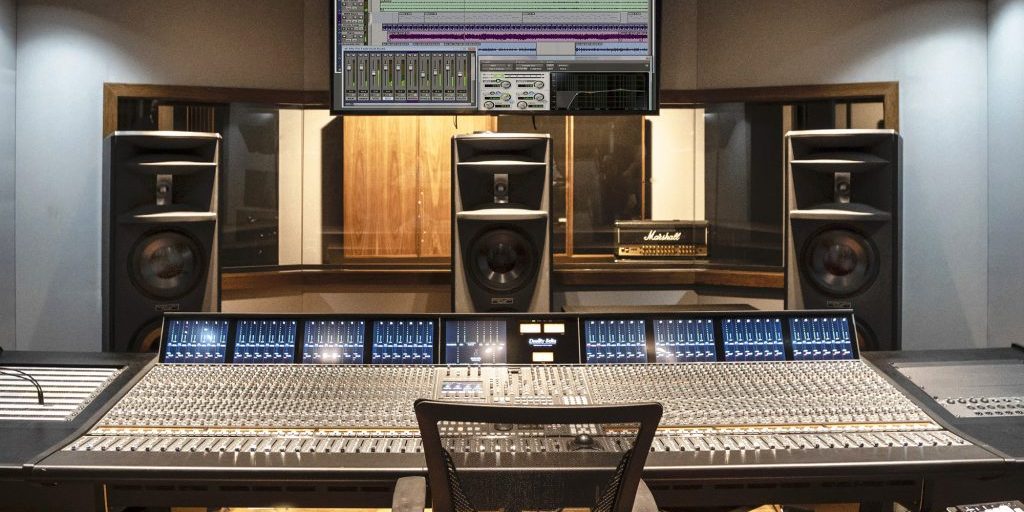 New York City, January 2020 – Invite Only Studios have opened in New York City featuring design by 2020 TEC Award-nominee Malvicino Design Group and massive Ocean Way Audio speakers for stereo and 5.1 monitoring. Germany’s Sommer Cable was used throughout the studio and in the OWA monitoring system. Studio A houses a 48-channel SSL Duality console, while Studio B has as its centerpiece a custom Slate Raven Z3C MTX console, the only one of it’s kind in the world.

Both Studios A and B feature full Ocean Way Audio 5.1 surround monitoring with three HR3.5 speakers in front and two HR4 speakers in the rear channels. State-of-the-art A-4100 amplifiers power the monitors with both analog and digital inputs, 96 kHz and 24-bit sampling, tri-amped delivering 3,400 watts per channel of pure power. At the heart of the acoustic design is OWA’s geometrically complex, composite dual/hybrid waveguide system.

Invite Only producer and founder Angelo “Doc” Velasquez commented on the studio design and the performance of the two massive Ocean Way Audio monitoring systems, “We have a very demanding clientele working on all genres of music from classical to hip-hop. Horacio’s design and his integration of these monitors into our studios is a very dynamic combination. Every producer, engineer and musician who has come through has remarked on the quality, the clarity, and the sheer power of these speakers.”

Designer Horacio Malvicino added, “Doc made it clear from the beginning that they like high SPLs and a smooth low frequency response. Ocean Way’s HR 3.5 monitors are extremely powerful, and the addition of the subwoofers gave the added desireable low-end punch. The biggest challenge in the acoustic design was to achieve total isolation between the two adjacent studios and also from the other tenants in the building.”

Traditional mixers who prefer an “old school workflow” will feel comfortable at Invite Only, as will mixers who wish to leverage the best features of analog mixing as well as DAW control via the console. On hand is a variety of traditional and boutique outboard gear from industry leading manufacturers such as Manley, Avalon, Pultec, Universal Audio, and numerous others.

The monitoring systems include Ocean Way Audio Ultravoice® amplifiers and voicing modules. Sommer Cable is used both internally for the cabinets and also from the amps to the cabinets, respectively Elephant Robust SPM440 cable and SC-Twincord cable.

“We’re using Sommer Cable’s Mistral Multicore cable throughout the studios,” explains Malvicino. “It’s amazing that this cable can actually run analog audio and digital audio, so when I’m wiring a facility I don’t have to worry about using separate analog or digital cable runs.”

ABOUT OCEAN WAY AUDIO
Multi-Grammy award-winning engineer/producer and studio owner Allen Sides is the designer of Ocean Way Audio monitor systems. Sides has been a die-hard audiophile since the age of 13 and his new high-resolution monitors are the culmination of almost 40 years of experience designing systems for his many studios as well for a wide variety of commercial installations, including George Lucas’s Skywalker Ranch scoring stage, Trevor Horn’s Sarm studios in London, and Walt Disney’s Hollywood Records, as well as private installations for musical artists such as Gwen Stefani, Dave Grohl, and Beck. Today, Ocean Way Audio products are in use in many of the world’s most respected recording studios, sound stages, and personal audiophile listening environments.
https://oceanwayaudio.com/

ABOUT MALVICINO DESIGN GROUP (MDG)
Malvicino Design Group is a design and consulting firm specializing in innovative architectural, acoustical, and technical systems design. With nearly two decades of experience in the corporate, broadcast, multimedia, entertainment, and consumer industries and markets, MDG has established industry trust with a solid reputation for creative yet practical designs, integrated with sound engineering and close interaction with clients. MDG’s foundation in architectural, acoustical, electrical, and mechanical engineering, as well as music, recording engineering, and studio business guarantees a uniquely custom approach to each project. https://www.malvicinodg.com

ABOUT SOMMER CABLE
Sommer Cable Germany is an enterprising development and manufacturing company of innovative and unique cable, connector and electronic products for the Studio, A/V Installation, Live Sound, Broadcast, Video, Music, IT and HiFi markets, with business partners in over 50 countries. In 2015, Sommer Cable America, Inc., a wholly owned subsidiary of Sommer Cable Germany, was established in Santa Rosa, CA. Jed Larson is COO of the new company, which supplies the North American markets with Sommer’s wide range of innovative and high quality products. 707.200.4020 http://sommercable.com/en