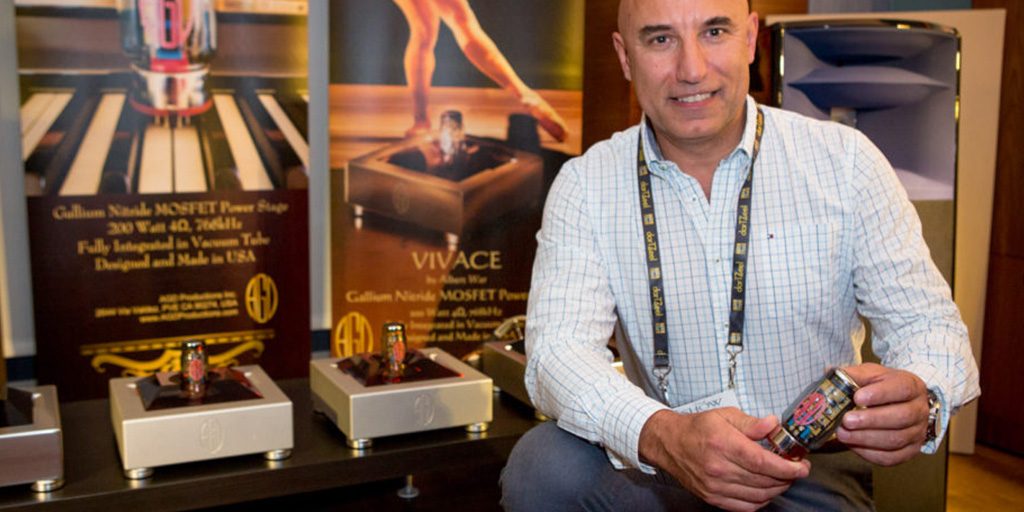 Writing for AudioHead, Bryan Beasley took a trip to The Home Entertainment Show, aka T.H.E. Show, in Irvine, CA last weekend, and documented his experiences. He seems to have enjoyed himself overall, but he made it clear that his highlight of the show was wandering into Room 312, where Ocean Way Audio was exhibiting along with our friends at AGD Productions.

“Eventually, I found my way into the AGD Productions room. There I was seduced by the sweet amber light of the AGD Vivace GaNTube MonoBlock amplifier. With Allen Sides’ Ocean Way Audio speakers attached, the system was humming and had pulled a packed room. Allen, a multi-grammy award winning producer, was basically DJ’ing. Showing the range of the setup, he pushed and pulled between classical, standards and good old rock-n-roll. With a tap of the shoulder, Alberto Guerra, AGD’s CEO, introduce himself to me. Alberto, with his smooth Italian accent, took me on an in-depth tech walkabout explaining the magic of the GaNTube sound. Most of it went over my head, but what I do know is that the system truly had a complex intensity – I loved it.”

Bryan also got to hear the story of when Alberto from AGD first met Ocean Way Audio CEO Allen Sides.

“It wasn’t until Alberto saw the wall filled with Platinum Albums (from the likes of Sinatra, Diamond, Manilow, and Aerosmith) all engineered and mixed by Allen, that he realized he’d just passed the ultimate audiophile test. I’m very much looking forward to what these two have in store for us in the near future.”